October is PORK month and this is a great recipe to serve your family. And best of all, it is easy. I particularly like the spices and the little bit of sweetness the apricots give. I have made a few changes to it which I have noted at the end of the recipe. 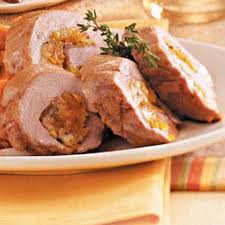 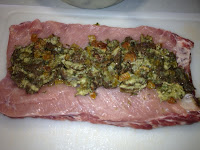 With knife, cut loin open horizontally. Spread stuffing of the meat. Roll the meat around the stuffing and tie at intervals with fine string. 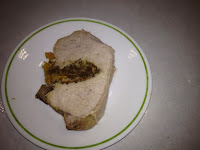 Heat oven to 350 degrees.  Put pork in roasting pan. Brush with olive oil and season generously with your choice of seasoning. Cook for 1 1/2 hours or until internal temperature is 145 degrees.  Let stand for 3 minutes. Slice and serve!

NOTE: Instead of the pumpernickel bread I used a marble rye. I also added some milk to the stuffing mix. I like my stuffing a little more moist.

Also because I used the center cut pork loins they were a little thicker so I wasn’t able to get the roll like the professional food picture shows.

Previous Post: « Where Does Pig Manure Go?
Next Post: MN Agriculture: Jeremy Geske And His Passion For Sheep »