You are here: Home / Animal welfare / When Our Animals Get Sick and Die
194 shares

One of the hardest and most challenging aspects about farming is when our animals get sick.

We hate it. No, we really hate it.

And the only thing worse than sick animals is dead animals. We just can’t get around the feeling that we have failed them.

So why do pigs become sick? Pigs, like most other living things, do catch viruses. Viruses spread easily in pigs. Most viruses are either respiratory-related or gastrointestinal-related.

What does a sick animal look like? The most common symptoms in pigs are diarrhea, cough, hard breathing and vomiting. Most times we know what illness they have based on their symptoms and other conditions. If we don’t know why an animal is sick, we call our local veterinarian. Typically, the veterinarian visits our farm and asks us questions such as: what are pig’s symptoms, when did you start seeing the symptoms and has anything changed on your farm? Sometimes they will take samples of saliva and fecal matter. After collecting and examining all the information, a diagnosis is determined and a plan is developed to hopefully bring them back to good health. This is the best-case scenario. 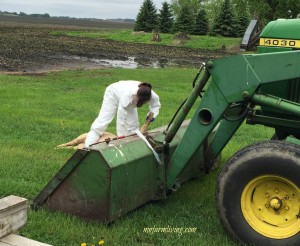 When a Pig Dies

Depending on the symptoms or the physical condition of the pig, we usually know why the pig died – especially if they were sick prior to death.  If we aren’t sure why they died, it’s important we find out the cause because we may need to change the animal health plan to help the other healthy pigs stay healthy. So how do we know the cause of the death if there are no apparent physical signs? A necropsy is performed by our veterinarian.

What is a necropsy? Think of an autopsy for humans. It’s basically the same thing – just with animals. A necropsy is performed to find the cause of an animal’s death.

A real-life example of a necropsy

A couple of weeks ago we had a 200-pound pig die. We weren’t sure why it died. Things just didn’t look quite right in the barns and it was important to know why this pig died. Our veterinarian, Dr. Andrea Pitkin, came to our farm to perform a necropsy on the dead pig. Fortunately, the necropsy was done within a few hours of the pig dying, which helps to determine the cause of death.

The first thing she does is look at the outward appearance of the pig for any clues and then proceeds to examine the internal organs. She determined this pig died of a hemorrhagic bowel – which means the bowel became twisted. Hemorrhagic bowels cause immediate death. We knew it was a rather sudden death because there was still fresh feed in it’s stomach. I asked Dr. Andrea if there was a way to tell the pig had this condition while it was alive. Her answer – no. I also asked if there was a way to prevent this type of death. Again, the answer is no.

Our pigs still were not feeling well. We were seeing diarrhea. Not every pig had diarrhea, but definitely more than what is normal. We had just recently changed their feed diets so we were wondering if the diet change was causing diarrhea. Again, we had our veterinarian (this time, another veterinarian) out to the farm. He could not diagnose the problem on the farm, but he had a strong suspicion of what we were dealing with. He collected a fecal matter sample and was planning on sending it to the University of Minnesota Veterinarian Diagnostic Lab. So what was our veterinarian’s suspicion? PEDv. 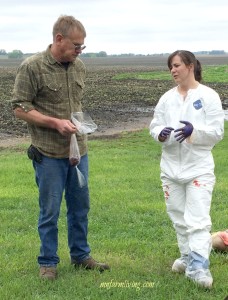 And he was right.

We both felt sickened by it. A little shell-shocked. And embarrassed. How could we have contracted PEDv? We were told our neighborhood was a PEDv hotbed. It was everywhere . . . Ugh. So what is PEDv?

PEDv is a new virus in the United States – been here for about 2 years. We know it originated from China, but experts are not sure how it was transmitted. When the PEDv came to the U.S., there was no test for it, no vaccine and we knew very little about the virus. But the U.S. soon found out how devastating it is to baby pigs. For most farms, there is 100% baby pig mortality for about 5 weeks. Yes, imagine 5 weeks of dead baby pigs and nothing can be done to prevent it. Eventually, the mother sows gradually build up a natural immunity to the virus, which then is passed down to the baby pigs through the milk. It’s estimated the United States pig population lost about 7-8 million baby pigs during the winter of 2013-2014.

Perhaps the most important thing about PEDv is it does NOT affect meat quality or food safety.

One good thing about having PEDv on our farm is we do not have baby pigs. At the moment, our pigs weigh about 200 pounds. And, obviously, the most common symptom is diarrhea. We didn’t lose many pigs. Thankfully (big sigh of relief). And because it’s a virus, all we could really do was give the pigs an “aspirin” and let the virus run its course.

But our biggest question is how did we get it and how can we prevent from getting it in the future? We are still trying to figure that out. The most common method of transmission is foot traffic. In other words, we physically stepped on an area that had the virus and carried it in the barns on the bottom of our shoes. But the latest research also indicates the virus has been detected in the air 10 miles downstream. Only after we were diagnosed with PEDv were we told many of our neighbors also had PEDv. We had no idea and frankly, it would have been nice to know.

Virus prevention comes back to biosecurity. Because we are a small farm, we have minimal traffic in our barns. Feed trucks don’t visit our farm (because we make our own on-farm feed), unlike many other pig farms in our area. When the original wave of PEDv hit the U.S., we increased our biosecurity on our farm by changing the way we pick up feed ingredients from our local feed store. No longer did we enter the feed store to place our feed order, but rather, we called ahead and picked it up “fast food drive-up window style”. We drove up to the loading area and the feed ingredients are loaded into the back of our pickup – all while never leaving the vehicle.

Another aspect of the virus has us puzzled. The specific area in the barn where the virus broke doesn’t make sense to us because it’s not the first area where we enter the barns. Logic tells you the virus (had it come in on foot traffic) should break in the first location pigs are taken care of. But this was not the case. So it’s possible the virus was transmitted through the air. And trying to prevent its transmission through the air is very difficult. How do you keep air from moving?

And I can also tell you neighboring pig farmers are uncomfortable talking about it. And I can understand that. We feel like we didn’t do our job right. We feel like we have failed our animals because of something we did or didn’t do. We just feel bad. And sometimes it’s embarrassing for farmers to talk about it.

As a result of PEDv, we will re-examine our biosecurity and find areas where we can tighten it again. We also need to work with our veterinarian to decide how best to clean up our farm site after the pigs are sent to market. This virus doesn’t die easily and cleaning up our pig barns effectively could be a challenge.

Just as we have done for years, we will do things better today than yesterday. And tomorrow will be better than today. Continuous improvement. That’s what we focus on.

Always have, always will.